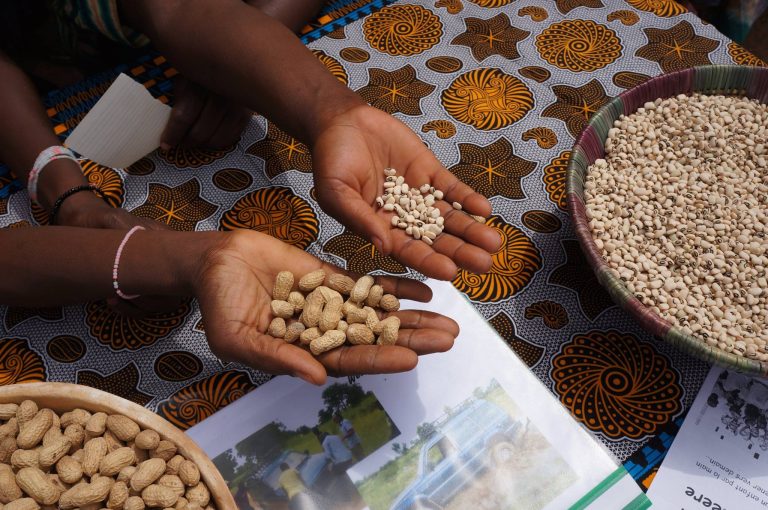 There’s a quiet revolution taking place in farms and kitchens across the small West African country of Burkina Faso. As food has moved towards the pre-processed and microwavable, people have become more and more detached from their meals’ origins and ingredients. However, an international movement pushing back against these trends is developing. In place of fast food, people now demand “slow food.” Slow food recovers the traditions of food preparation and celebrates diversity, rather than standardization. With an emphasis on culture, the movement focuses on growing, making, and eating food as a community. 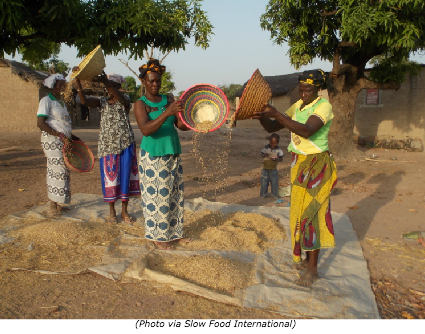 When some people think of slow food, they think of a movement that’s about people in wealthy countries who are enjoying elaborate meals in expensive restaurants. But despite this common perception of slow food as a craze reserved for upscale urban centers, slow food is actually a grassroots movement coming from below, rooted in indigenous communities and building ties with food producers in the global south. In West Africa, where the movement is growing, slow food means defending food security, breaking from large-scale industrial agriculture, and preserving traditional, sustainable agriculture practices. At the Cultures of Resistance Network, we’re proud to be involved with international organizations like Slow Food and Via Campesina, which are both creating rich networks of people and groups working in West Africa and beyond to promote sustainable and ethical food practices.

In Burkina Faso, a small, landlocked country in West Africa, the slow food movement is taking root, spreading from the capital of Ouagadougou to small villages. In spring 2016, a caravan organized by Via Campesina allies traveled from Burkina Faso to Senegal, linking together the struggles for the human rights to food, land, water, and seeds. A year later, in February 2017, Slow Food organized Terra Madre Burkina Faso, West Africa’s first gathering of food communities. For years, the organization has been working to map the country’s local food products and create school and community food gardens, but this campaign is just one of the many slow food initiatives underway in Burkina Faso. Below are a selection of other grassroots efforts in the country that offer lessons for the rest of the globe. For a complete list of Slow Food‘s efforts in Burkina Faso, click here.

Ouagadougou lies in the center of Burkina Faso’s over-105,000 square feet of land. With a population of about 2.7 million, the city is growing rapidly. From 2007 to 2014, the population increased by over 50 percent, according to the New York Times. 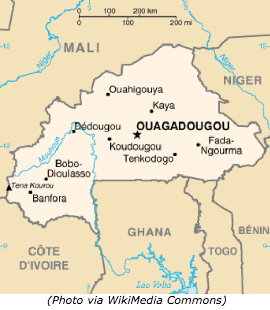 On the outskirts of this burgeoning metropolis lies a chemical-free community garden run entirely by women. La Saisonnière, an organization in Ouagadougou, works to guarantee the economic and social rights of Burkinabé women. One of its major projects is the Nongr-Maasom community garden, tended to by about fifty women. Chemical fertilizers were once used in the garden, but the women now use natural products, including fertilizer, compost, and manure. This switch from chemical to natural is helping to restore the soil’s health and produce better harvests. The women each choose the vegetables that they wish to plant. After they’ve produced enough to feed their families, the women sell their surplus harvest at a nearby market. About 300 children also use a portion of the garden as an open-air classroom, where they are taught the basics of sustainable agriculture. In the northeastern town of Yako, a new restaurant is celebrating local food and preserving indigenous traditions. Run by the Génération Revenu association, which works on agricultural projects, the restaurant’s proceeds support small farms in the town. In this part of Burkina Faso, the best-selling product is the desert date, which is harvested by about a dozen women in the community. At the restaurant, the typical dish is guelbom, which is made with the condiment soumbala, fermented sorrel seeds (a type of herb), dried fish, and millet flour. Next door, Génération Revenu also runs a shop selling local foods. If you were to visit, you would find cookies made with baobab and jujube fruit, soaps made from desert dates, and seasonings like soumbala and liikalga. 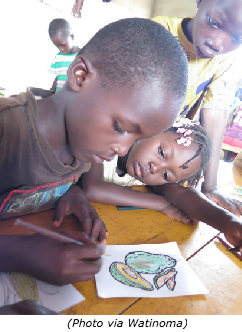 On any given day at Watinoma‘s community center in Koubri, about fifteen miles southeast of the capital, you might find kids engaged in educational projects, adults learning traditional textile methods, or artists giving musical or story-telling performances. A member of Slow Food‘s network and based in Italy, Watinoma is working to impact food and agriculture practices in Burkina Faso through community involvement. In addition to the many activities at its community center, the organization also created and runs numerous local gardens. It even started a school of its own for local children from ages six to twelve. 160 students now attend the school at no cost.

From eating locally and examining your own food consumption to standing in solidarity with food activists in other parts of the world, there are many different ways that you can get involved with this international movement. To get started, you can: