Take a Stand for Indigenous Rights 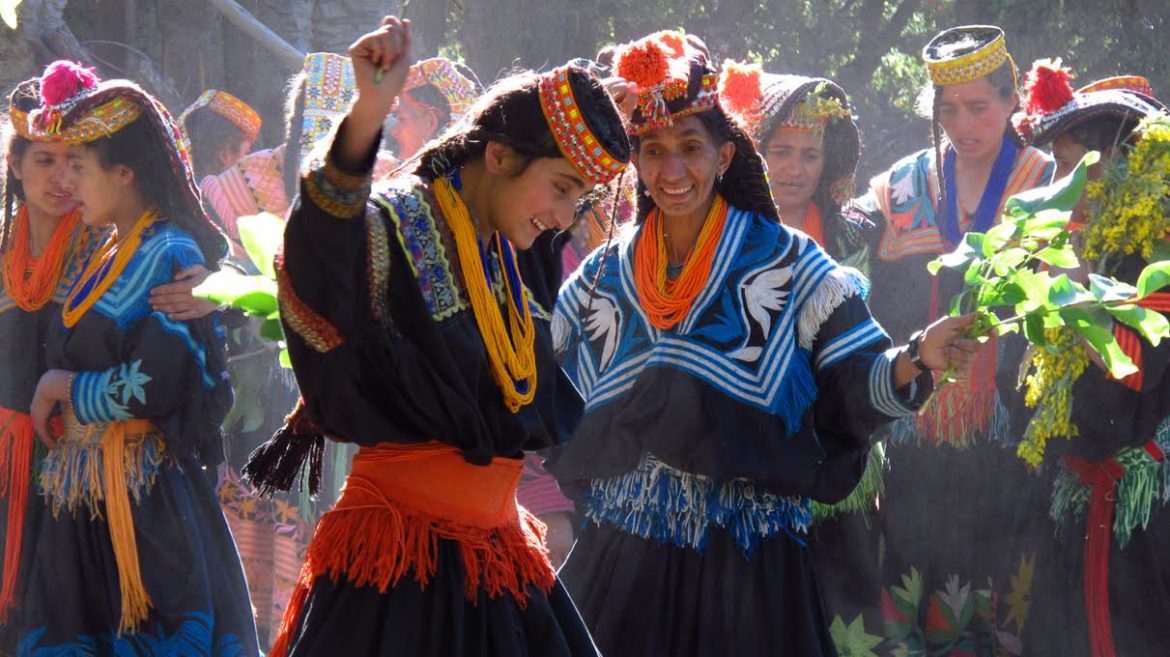 One of our key areas of focus at the Cultures of Resistance Network is confronting injustices against indigenous peoples and promoting cultural survival. Whether in the villages of Nigeria, the Brazilian rainforest, or the mountains of Pakistan, our network has long worked with partners who are standing with indigenous communities as they face threats from industrial infrastructure, mining, and other major corporate and government projects.

Often, indigenous communities are the victims of mainstream visions of “development.” The construction of mines, mega-dams, and plantations often means that the long-time stewards of the land are displaced. Human and environmental exploitation often go hand in hand—for example, when rainforests are cleared to make way for monoculture crops or rivers are polluted by oil drilling. The resulting loss of cultural and linguistic diversity is equally dramatic, as indigenous peoples abandon their languages and customs to assimilate in cities: the UN Permanent Forum on Indigenous Issues estimates that 90 percent of the world’s languages are at risk of disappearing in the next 100 years, the majority of them spoken by indigenous peoples.

The CoR Network is proud to partner with allies Survival International, Amazon Watch, International Rivers, Cultural Survival, and EarthRights International to advance a number of campaigns for indigenous rights around the world.

With several major industrial and infrastructure projects underway, Brazil is also a focal point for battles over indigenous rights to land and water. The country has more rainforest cover than any other country on earth, and the Brazilian rainforest is home to the world’s greatest number of uncontacted tribes. However, with industry and agriculture expanding at a dramatic pace, deforestation is having a profound impact on the country’s indigenous communities, to the point where several tribes are on the verge of extinction.

Among these tribes is the Awá. Few indigenous lands have seen as much pressure from illegal logging as the Awá forests in Brazil’s eastern Amazon region, where forced displacement and violence, including documented murders, have caused the Awá population to dwindle to an estimated 350 people, approximately one-third of whom remain uncontacted. As a result, Survival International has labeled the Awá “earth’s most threatened tribe.”

Since 2012, the Cultures of Resistance Network has supported Survival International’s creative campaign in defense of the Awá. In 2014, Survival International and the Awá celebrated an unprecedented victory when the Brazilian government sent troops to expel the illegal loggers from Awá land. As part of the campaign, 57,558 people from thirty-eight different countries sent letters to Brazil’s Minister of Justice. However, the campaign hasn’t stopped. Our allies are keeping up the pressure on the Brazilian government to ensure that the loggers don’t return and that the Awá can live in peace on their land.

On Survival International’s website, you can take action by donating to this important campaign. The participation of students, artists, filmmakers, and celebrities has already brought crucial attention to the Awá struggle. But only continued pressure and solidarity will allow the Awá people to sustain their traditional way of life.

Since 2008, we have stood in solidarity with indigenous opposition to the Belo Monte Dam on the Xingu River in Brazil’s Amazon. Completed in November 2019, it is the world’s fourth-largest hydroelectric dam. Belo Monte’s disastrous impact is felt by the thousands of indigenous people who rely on the Xingu River for survival, destroying the biodiversity of the river basin and depriving its people of their rights to a sustainable future. For over a decade, Indigenous peoples in the region have been protesting against the dam and other destructive projects in the Amazon region, including a toxic gold mine that a Canadian firm proposed to open in the vicinity of the dam.

In 2017, filmmaker Todd Southgate released a new documentary, “Belo Monte: After the Flood,” that chronicles the indigenous resistance to Belo Monte and was produced by our allies Survival International and International Rivers. Learn more about the film here and watch the trailer below.

For more background on the dam, as well as breaking news and action alerts around other indigenous rights issues in Brazil, check out Amazon Watch’s blog.

Ecuador: Standing Up to Big Oil

For decades, the people of Ecuador’s Amazon region have fought a landmark case against oil giant Chevron, demanding reparations for one of the biggest oil-related environmental catastrophes in history. Despite a 2012 appeals court ruling that requires the giant to pay $19 billion for polluting environmental and human health, Chevron has continued, through diverse legal tactics and covert operations, to challenge the ruling and avoid paying for the enormous clean-up and remediation efforts needed in the Ecuadorian Amazon.

This landmark case has brought together several indigenous groups seeking to hold the multinational oil company accountable for its decades of environmental degradation and disregard for human rights. 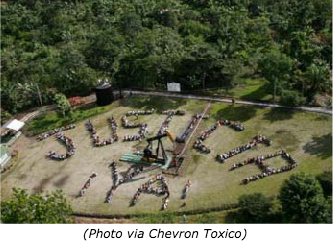 Still, Chevron refuses to accept responsibility and has continued appeal in various courts. In 2014, it won a case alleging that Steven Doniger, the lawyer who won the $19 billion settlement against the company on behalf of Ecuadorian plaintiffs, had engaged in fraud during the trial. Though the judge maintained that pollution had indeed occurred, he barred Doniger from profiting from the case.

Currently, the Ecuadorians have filed lawsuits in Canada and Brazil to seek seizure of Chevron’s assets in order to force the company to pay for the clean-up and remediation of the Ecuadorian Amazon jungle. Lawsuits in other nations are expected to follow.

Follow recent developments in the case on Amazon Watch’s blog, and learn how you can take action on the Chevron Toxico website.

Fortunately, not all indigenous groups are as urgently threatened in their day-to-day existence as those living in the Amazon region. But when it comes to indigenous languages and culture, the threat of extinction is widespread. A global history of colonialism, racism, and discrimination has led to the extinction of approximately 600 languages in the last century, and an estimated 90 percent of the 6,000-plus languages spoken around the world today are projected to disappear in the next hundred years. The vast majority of these languages are spoken by indigenous peoples and are in danger of disappearing without a trace.

Recognizing the urgent need to protect traditional knowledge and culture, the CoR Network supports Cultural Survival’s Endangered Languages Program, in which the group partners with tribal language programs in the United States to strengthen fundraising efforts for linguistic education projects.

In addition to the Endangered Languages Program, the CoR Network celebrates the indigenous language revitalization projects of many other organizations. To learn more about these efforts, check out our page on preserving indigenous languages.

Rumored to be the descendants of Alexander the Great, the Kalash people have in fact inhabited northern Pakistan’s Chitral valley since long before the legendary conqueror came to the region. They uphold a rich cultural heritage, with polytheistic beliefs, seasonal festivals, and a variety of other traditions that are at odds with Pakistan’s dominant Islam. Today, even as the the majestic peaks of the Hindu Kush mountains shield the Kalasha from the region’s worst violence, their culture faces a variety of pressures: poverty, tourism, and Islamism are all contributing to the erosion of Kalash identity. 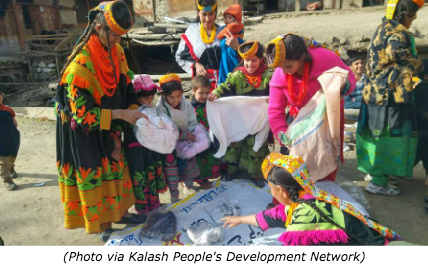 Still, a dedicated group of Kalash advocates are fighting to keep their culture alive. The Kalash People’s Development Network is leading education, health, and women’s empowerment programs in the area, as well as promoting Kalash crafts. Link up with them through their Facebook page to show your support!

Through our experience with past campaigns for indigenous rights, we know that international solidarity can be effective in winning landmark victories. One such victory came out of a legal campaign to hold oil companies accountable for crimes perpetrated against indigenous peoples, workers, human rights leaders, and the environment in the Niger Delta region of Nigeria. These abuses peaked in the mid-1990s, when Shell backed repression against environmental justice and human rights activists that culminated in the executions of nine Ogoni leaders, including internationally acclaimed writer and activist Ken Saro-Wiwa. Seeking justice for the victims, CoR Network allies EarthRights International and the Center for Constitutional Rights pursued a series of human rights cases known collectively as Wiwa v. Shell, which led to a landmark $15.5 million settlement in 2009.

For continued advocacy on behalf of the Ogoni people, link up with the Movement for the Survival of the Ogoni People on Facebook.