Shadia Mansour: The First Lady of Arab Hip Hop Speaks Out Against Occupation 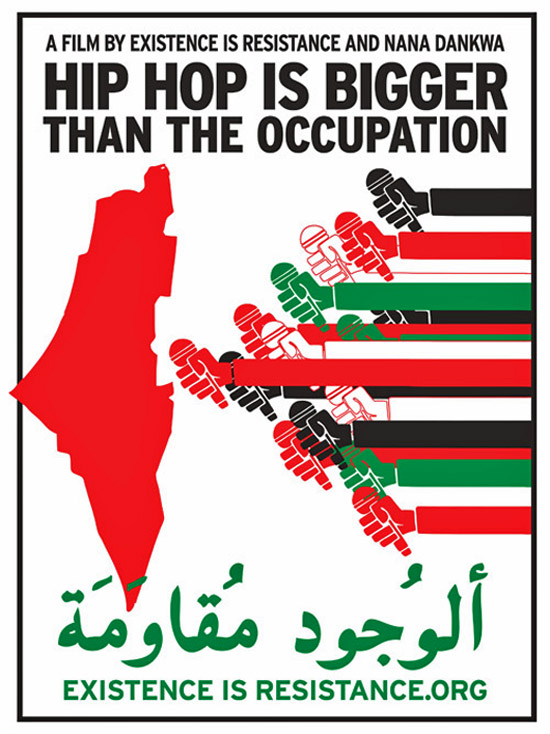 At the Cultures of Resistance Network, we’re always on the lookout for young voices bridging art and activism. Among the talented musicians we’ve been proud to work with is Palestinian MC Shadia Mansour, who is is at the forefront of a new generation of artists calling for Palestinians’ right to self-determination. For her, the meeting of music and politics is a natural one. Growing up listening to American rappers like KRS-One, she easily related the stories of injustice and oppression voiced in American hip-hop to the experiences of the Palestinian people. “I thought, we’re suffering the same issues,” she stated in an interview with PNC Radio. “We’ve got police brutality going on right here in Palestine.”

As an internationally-acclaimed artist, Mansour has had the chance to travel the world and meet many of her influences from the US hip hop scene. In 2011, she released the single “Al Kufeyyeh 3arabeyyeh” with M-1 from the rap duo Dead Prez.

Discussing the song with WNYC’s Brian Lehrer in March 2013, she discussed how music and culture fit into the struggle for Palestinian liberation. “Palestine is still colonized, still occupied,” she said. “In terms of defending our identity… our culture, our traditions [are] probably the strongest weapons we have today. That’s part of the nonviolent resistance that we’re all playing a role in.” Mansour was joined for the interview by fellow hip-hop artists from North Africa and the Middle East, each fighting for freedom in their own countries: Egyptian rapper Deeb, whose music helped inspire Egyptian revolutionaries at Tahrir Square, and Malian rapper Amkoullel were both in New York along with Mansour for a performance at the Brooklyn Academy of Music. At the event, she shared stories of Palestinian occupation and the struggle for freedom. “I see Israeli tanks in Ramallah… Nothing changes. [But] I’m hoping that this generation is going to make that change.”

International Collaborations and a Shared Message of Resistance

Since an earlier trip to New York in 2010, Mansour has been collaborating with one of her first influences, producer Johnny Juice, who describes Mansour’s presence on the rap scene itself as an act of resistance. He says, “In this country, the women have to be quiet, you know we would rather see you than hear you. To hear Shadia come in here with a forceful voice and a message, especially coming from the Arab community because there are a lot of places where Arab women aren’t allowed to really express their voices.”

After meeting with Mansour in New York, CoR Network director Iara Lee wrote a piece for her Huffington Post blog about the resurgence of political hip-hop, paying particular attention to some of the artists she encountered while filming in the Middle East:

…I encountered a hip-hop reborn through artists like the Ramallah Underground and Shadia Mansour, both Palestinian, as well as London-based Iraqi rapper Lowkey (who are all part of a larger collective known as the Arab League of Hip Hop). Their flows cut deep against the tyranny of Israeli and US occupation of their lands as they call for equality for all people, and reaffirm their Arab identity despite brutal attempts at cultural erasure. The goal, Shadia said, was to tell the world that “Palestine is on the map,” and always will remain so.

To listen to more of Shadia Mansour’s music, check out her official Youtube page. For updates from Mansour regarding performances, campaigns, and more, visit her Facebook page.

To learn more about how artists from the Middle East are taking their struggle to the streets in creative ways, check out CoR Network ally Existence is Resistance, an educational initiative that teaches Palestinian children how to express themselves through hip-hop, graffiti, and other urban arts. To watch the trailer for their film, Hip Hop is Bigger Than the Occupation, featuring Shadia Mansour alongside Dead Prez’s M1, Lowkey, and many other artists, click the image at right.